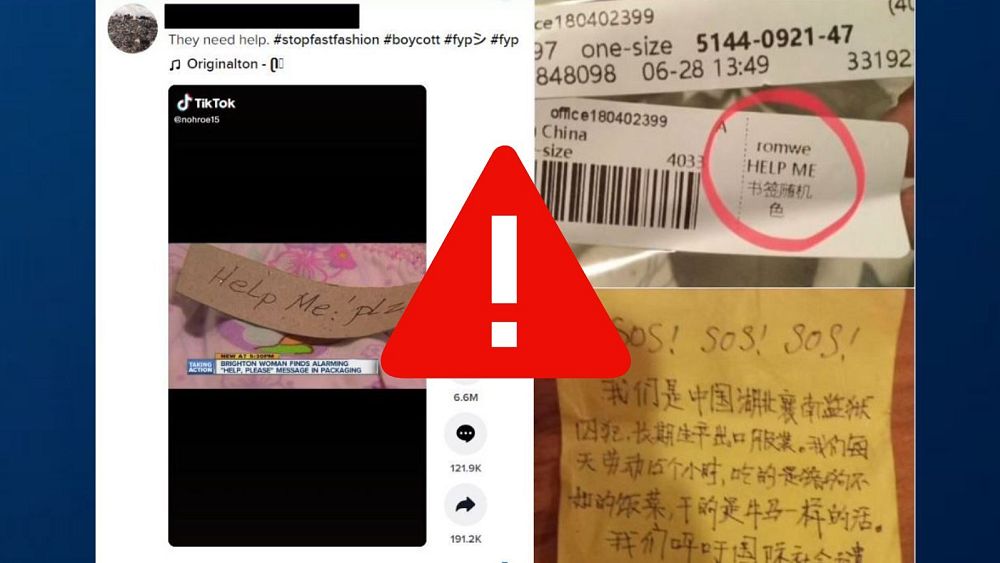 A viral TikTok video claims to show different messages that have been written or even s***ched onto labels of clothing produced by the Chinese fast fashion giant Shein.

Euronews has fact-checked these claims.

The video has received more than 40 million views and more than 6 million likes on the platform. It has even prompted some online users to support a boycott of Shein products.

However, this video is misleading and not all of the images in the clip are actual calls for help. For example, the first image comes from a 2015 news report where a woman from Michigan, USA, found a “help me” sign in a package from an underwear company located in the Philippines – unrelated to Shein.

The third image also shows a tag that says “help me” on a packaging label. But it’s from the Chinese clothing brand Romwe. The brand addressed this issue back in 2018, explaining that the “Help me” referred to a bookmark they sold with that phrase on it.

Another image showing “SOS” written over a message in Chinese is also included in the TikTok video. But this image is from a 2014 BBC news story. The note was found inside a pair of pants purchased at a Primark store in Belfast, Northern Ireland. Primark told the BBC it launched an investigation and said the pants were sold several years before the news story broke.

Euronews also checked other images in the video and found one of them was a stock photo and the other was a badly translated tag saying “I have dental pain” that has been circulating on humor forums since 2014.

Despite this, its not the first time that Shein or others in the have been credibly accused of poor and exploitative working conditions.

Shein have themselves released a statement on TikTok saying that they “take supply chain matters seriously” and have a strict Code of Conduct in place that prohibits suppliers from using child or forced labour.

Different Categories Of Boubou Gowns You Can Slay This Month

Man Shows Up At NYSC Camp As Wife Finishes Orientation, Puts Her Big Bag On His Head (VIDEO)

Julia Montes and Coco Martin are they wed? Family time with Martina’s wife and daughter » PHOOSI

Different Categories Of Boubou Gowns You Can Slay This Month

Man Shows Up At NYSC Camp As Wife Finishes Orientation, Puts Her Big Bag On His Head (VIDEO)

Julia Montes and Coco Martin are they wed? Family time with Martina’s wife and daughter » PHOOSI

How did Dyteon Simpson fare? Killer of Wayde Sims passes away in prison after fentanyl overdose » PHOOSI

Peter Obi ought to be going to Ekiti not Egypt, Moghalu was defeated by Dumebi – Cmr Deji Adeyanju – GossipAxis