On Monday morning’s third and final lap of the race, the County Down rider fell at the 27th Milestone.

Morgan, who was 52, is the third TT rider to die this year. Mark Purslow, a Welsh rider, died last week in an accident during practice, and Olivier Lavorel, a sidecar passenger, died in an accident on Saturday. 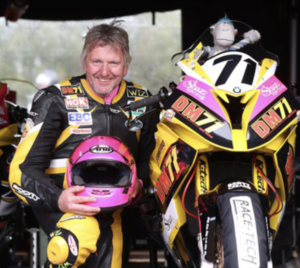 Davy Morgan Death Cause – Carsh During Isle Of Man TT 2022+

Accidents killed TT racer Davy Morgan in today’s Supersport race (6 June). The 52-year-old man from Saintfield, Northern Ireland, died in an accident on the third and last lap of the race.

After the top three riders crossed the finish line at the 27th Milestone, a hilly part of the course, the race was stopped right away.

Davy was an experienced TT racer. He had raced in every TT since his first one, the Production 600cc race in 2002. This was his 80th TT start. In his career, he got seventh in the Senior TT in 2006 and fifth in the Lightweight TT in 2008, which was his best finish.

He had finished 49 times, with 25 of those times being in the top 20. His previous efforts had earned him 14 silver duplicates and 30 gold. He had the fastest lap at the Senior TT in 2010 with an average speed of 125.134mph over the TT Mountain Course.

The TT organizers have sent their deepest condolences to Davy’s partner Trudy, as well as to his family, loved ones, and friends.

At the time of his death, Davy Morgan was 52 years old and had been racing for 30 years. He was a very experienced competitor who was often seen in racing paddocks in Ireland, the Isle of Man, and at the Macau Grand Prix.

In 1993, he raced for the first time at the Bishopscourt short circuit, but racing on public roads soon became his main focus.

In 2005, he won the 250cc class at the North West 200, and in 2012 and 2017, he won the same class at the Ulster Grand Prix. These wins were among the best of his career. He was best known for making two-stroke motorcycles, but he could also make 600c and Superbike machines.

In 2004, the racer from Saintfield won the Senior Manx Grand Prix, as well as several Irish national road races and the Southern 100 on the Isle of Man.

Since his first TT in 2002, Davy Morgan has taken part in all of them. The Supersport race on Monday was his 80th.

In the TT, his best finishes were seventh in the Senior TT in 2006 and fifth in the Lightweight TT in 2008.

He had the fastest lap at the Senior TT in 2010 with an average speed of 125.134mph over the TT Mountain Course.

Davy has finished 49 times, with 25 finishes in the top twenty, 14 Silver Replicas, and 30 Bronze Replicas. Morgan won the Ulster 250cc championship in 2011.